This very informative documentary film makes a clear historical connection between Hollywood and Antichrist.  Many Orthodox can benefit by being reminded of the immediacy and the seriousness of Satan's use of television and movie entertainment in these end times.

But be aware that the narrator, a heterodox, is snared in the "born again" deception, which is cousin to the charismatic deception [see: Book Reviews Orthodoxy and the Religion of the Future  ch.7 in the sidebar].  He does not appear to be hostile towards the Church [as some obviously are], but maybe, rather, simply unaware of its existence.  The last 10 minutes are typical sola scriptura.

An inherent contradiction in the film is that we are shown flashes of scenes from a Hollywood portrayal of Christ to oppose the satanic images with the Christian side.  If Hollywood [not the TV itself which is just a machine] is evil, does it not stand to reason that even a seemingly honest Hollywood depiction of Christ will be twisted?  And so it is.

See below what our Met. Vitaly wrote about TV.  He did not believe it was possible to outlaw TV in Orthodox homes.  But, it would be the best advice.  It has been said that the "elect" who might be saved could be the ones who didn't watch TV.  I believe throwing out the TV [and reading the holy Fathers instead] is the fastest most effective way anyone can become "not of this world". 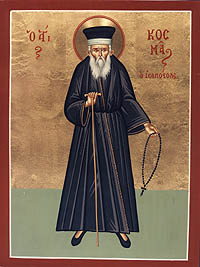 In the 1700's, St. Cosmas of Ætolus predicted:  "The time will come when the devil puts himself inside a box and starts shouting, and his horns will stick out from the roof-tiles..."   Also it was prophesied that the "box" would be in everyone's home and families would worship it in their homes.


When they start to pray more, they will be closer to God’s wisdom, but it will be too late, because the evil ones will already ravage the whole earth and men will start to die in great numbers. Then people will run away from cities to the country and look for the mountains with three crosses, and there, inside, they will be able to breathe and drink water.


Those who will escape will save themselves and their families, but not for long, because a great famine will appear.
The greatest and the angriest will strike against the mightiest and the most furious! When this horrible war starts, woe to those armies that fly over skies; better off will be those who fight on ground and water.
People waging this war will have their scientists who will invent different and strange cannonballs. We [i.e., Serbians] will not fight in this war, but others will do battle over our heads. Burning people will fall from the sky over Pozega [a town in Serbia]. Only one country at the end of the world, surrounded by great seas, as big as our Europe [Australia?], will live in peace, without any troubles… Upon it or over it, not a single cannonball will explode!
Those who will run and hide in the mountains with three crosses will find shelter and will be saved. But not for long times, since the great famine will appear. Food will be plentiful all over the cities and villages, but all will be poisoned… Many in order to feed themselves will eat everything and will die immediately. Those who will fast and endure fasting, those are the ones who will survive, because the Holy Spirit will preserve them; those will also be the ones closer to God in the time of great famine and perdition.
In that time, far away in the Russian mountains, a young man named Mihail will appear. He will have bright face and his entire appearance will radiate with mercy … he will come to the nearest Monastery and ring on all monastery bells, and to the people who will gather there around him, he will say: “You forgot about me (who I am), that I didn’t die but am alive…” Mihail will go everywhere but mostly he will dwell in Constantinople… those who have ears let them hear.