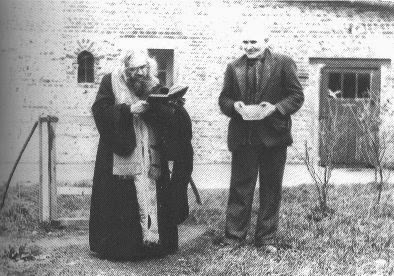 At that time there was a veritable persecution of pigeons in San Francisco, due to the assumption that they carried some disease, and hundreds of them were poisoned or shot.  I do not know these details.  But I do remember vividly the beautiful white-feathered creature flying about the little bentdown figure of the precious Saint, who not only loved this God-sent bird, but had some mystical contact with it.  The bird appeared in his life when he endured the greatest of his earthly trials; it forbade his ascent to the other world, and some other mysteries I was told about.  That feathered little creature of God was sent as a consolation to the sorrowing man of God, rendering him greater solace than men could do, who at that time were inflicting upon him his greatest pain.  Men who hate men cannot understand how animals could be truly God-sent consolers.
A spiritual daughter of Archbishop John, Olga Skopichenko, recalling this dove, even wrote a lovely poem, in which she hinted that the appearance of the bird, damaged by cruel men, was for our Saint a little window through which he gazed into heaven.

The above is from Orthodox Word magazine #191 Nov-Dec 1996.  When the article was written, there is a clue in the text: The orphanage was no longer a place where children were sheltered.  They had all come from China a decade previous, had already grown up into young adults, and used St. Tikhon's Orphanage Church as their parish, and naturally it has remained their home up to today.
From this text we know that it is during a time when the Chinese orphans were still alive and considered St. Tikhon's their home.

From a brief summary of a Life of St. John
. . . In the Fall of 1962 Saint John arrived in his last Diocesan See, and again, just as many years ago in his first Diocese, on the Feast of the Entry of the Most Holy Theotokos into the Temple. At first he came to assist the aging and infirm elder, Archbishop Tikhon and after his repose (March 17, 1963 o.s.) Saint John became ruling Archbishop of Western America and San Francisco. Again the Saint arrived to find an unfinished church, dedicated to the memory of the Mother of God, and once again, as in China, the Church was torn by discord.
Saint John’s first priority was to resume and complete the construction of the new Diocesan Cathedral of the Most Holy Theotokos “Joy of All Who Sorrow”, which had been entirely halted due to a lack of funds and sharp disputes as to the solution of the financial dilemma paralysing the church community. The Lord mercifully helped His Saint in this, who was suffering greatly as a result of this discord, yet continued both by prayer and by tirelessly overseeing the construction, to inspire everyone to sacrifice and work.
Saint John had to endure much at that time, even the necessity of appearing in an American civil court. The last years of his life were full of the bitterness of slander and persecution. Sometimes Saint John aroused envy, unfavourable criticisms, or bewilderment in people, when he dealt with them strictly adhering to church rules. At that time, someone asked who was responsible for the division in the Church. The Saint answered simply: “the devil”.
In 1964, construction of the largest church of the Russian Church Abroad in America, adorned with five golden domes, was essentially complete. The elevation of the magnificent crosses, the grandeur of which is visible when sailing in the San Francisco Bay, was proceeded by a solemn procession (over a mile) with masses of people participating. The procession was almost cancelled due to heavy rains, but the Saint, without any hesitation, led the procession with hymns into the drenched streets of the City. As the procession began the rain stopped. The crosses were blessed in front of the new cathedral and when the main cross was elevated, the sun broke through and a dove lighted upon the brightly shining symbol of Christ. This visible triumph of the elevating of Orthodox crosses, symbols of Christ’s victory, shining on the hills of a contemporary Babylon where satanism has been openly professed, was the crowning victory of the life of the Saint on earth. . . .

from a forum:
Today, (2001) a sign just across the street from the church where he once lived and is now buried displays a San Francisco city ordinance that prohibits feeding pidgeons.  If he were alive today, Archbishop John could have been fined for his act of kindness.  Curious irony. 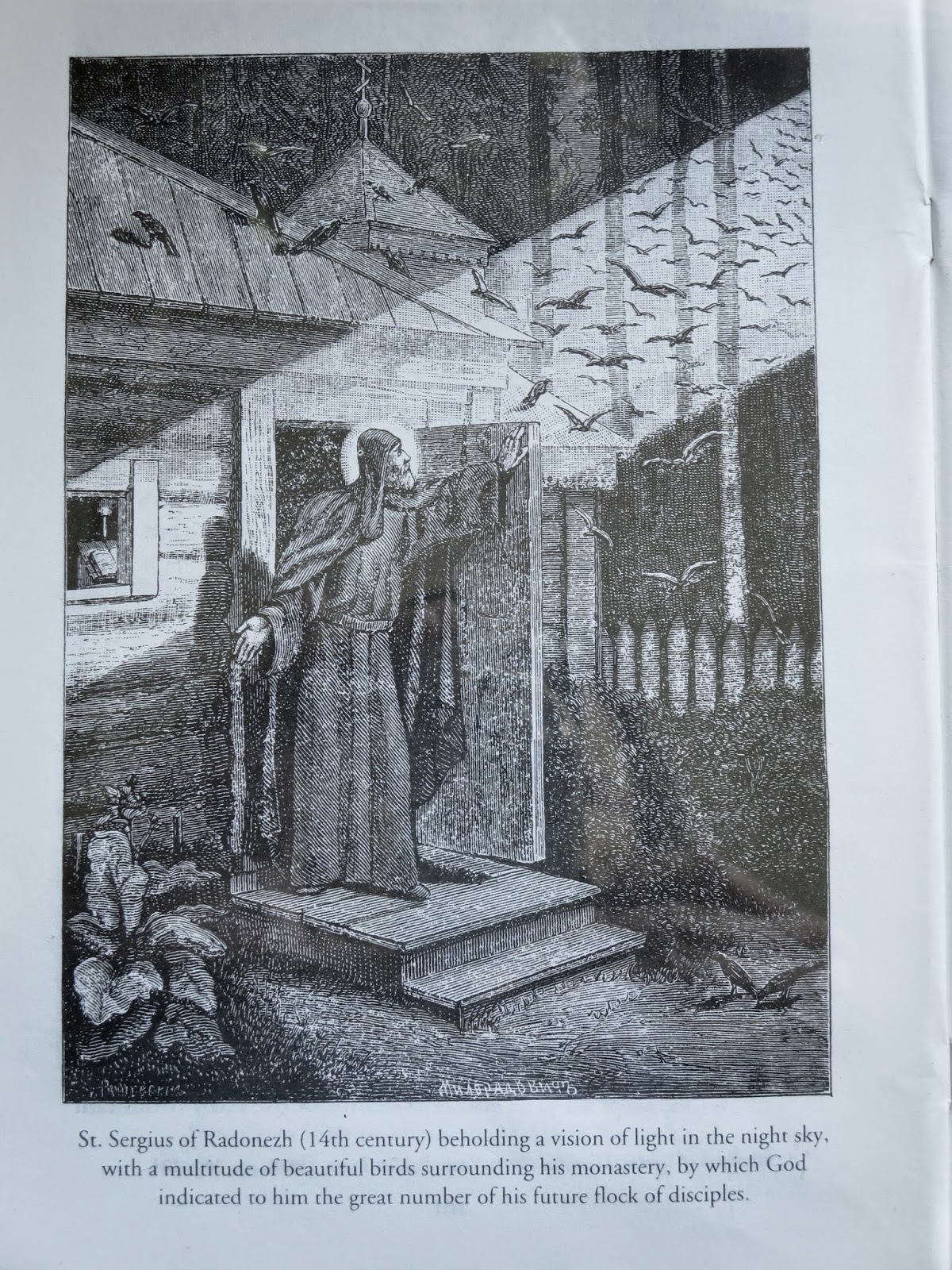